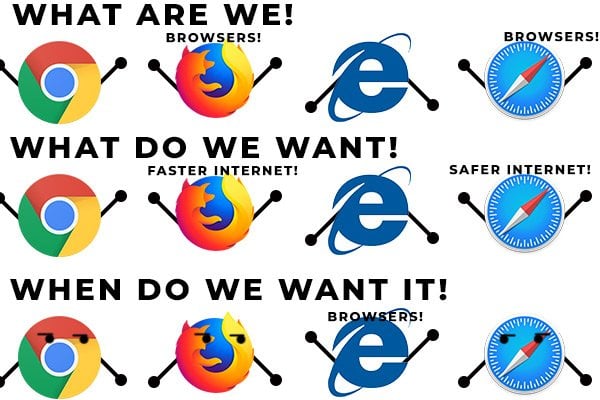 Have you ever heard a developer or techy person express their disdain for Internet Explorer and wondered why? What’s the difference? Believe me, I wish there wasn’t a difference, but Internet Explorer has been the bane of every front-end developer’s existence for almost two decades. It wasn’t always that way though. In fact, before it became trash it was actually amazing!

The History Of Internet Explorer

The year was 1994. Shawshank Redemption, Lion King, and Forest Gump were all released. O. J. Simpson led police on a chase, and Microsoft didn’t have a browser. In fact, almost nobody had a browser at the time. Mosaic, the “first popular browser”, was only a year old.

Microsoft licensed Mosaic for a quarterly fee and began developing Internet Explorer with a team of 6. In their terms with Mosaic, they had to pay a percentage of all non-Windows proceeds. To get around that they just gave away Mosaic, and then IE, for free. You can’t pay a percentage of $0.00!

In 1995, Microsoft released the second version of its browser, IE2. This version introduced bookmarks, which was a straight copy-paste from Netscape’s browser at the time. This was also the first version to adopt Javascript, the web developing language that allows the user to interact with elements on the page dynamically.

IE2 originally launched in 12 different languages, which was doubled on Windows 95 but didn’t yet include the now instantly recognizable “e” logo.

In 1996, IE3 started to compete against Netscape, which at the time was its only major competitor. Netscape was winning this first “browser war” by a significant margin though at that time.

IE3 was the first public browser with CSS support. If you don’t know what CSS is, it’s code that makes websites look pretty. So before this, you would have websites that would be in tables with no styling of any kind. CSS is what makes the internet what it is today.

In this “golden age” of IE, where they were still innovative and cutting edge, they released their logo, which hasn’t seen a significant change since.

Fast forward to 1997. IE4 was released, which tightly knit IE into the Windows operating system. Before this, you couldn’t use IE for much of anything regarding Windows file manager. This version won the first Browser war for Microsoft as well, with a market share of just over 60% before IE5 was released.

Also in 1997, Microsoft and Mosaic settle their obvious lawsuit with the laughably small sum, by today’s standards for corporate shenanigans, of $8M.

Microsoft skipped a year here and waited until 1999 to release the next version of IE. This might have had something to do with all the lawsuits they were dealing with through 1997 and 1998, but who knows.

Internet Explorer 5 introduced “accelerated browsing” and “smarter search” technologies. Honestly, those just sound like marketing nonsense for the browser got a bit faster and smarter. But it was smarter. IE5 added some of the everyday goodies we’re used to today like, AutoComplete, Favorites, and the History search bar.

In 2001, a year after the great Y2K scare of 2000, Microsoft released their next version of IE: Internet Explorer 6. It seems as though this is when it all started to go downhill.

Even though at its most popular point in 2004 with a market share of over 90%, IE6 was regarded as the “the least secure software on the planet” by PC World. In fact, in June of 2004, the U.S. Computer Emergency Readiness Team (CERT) literally urged PC users to use any other browser other than IE6.

Despite this browser being terribly insecure, Microsoft didn’t find a need to replace it or upgrade it for FIVE YEARS. Let that sink in for a second. There are adults that when IE6 was first released, graduated High School AND College in the same version. That’s bananas.

Mozilla entered the scene during IE6’s lifespan under the codename “Pheonix.” Firefox, Mozilla’s first browser, was officially released in November of 2004 and within months started the next great “Browser War.” To this day, this was the last time Internet Explorer saw an increase of over 5% in market share month over month. In fact, IE has lost market share almost every single month since 2004.

This version was still found to be insecure when in 2008 a security vulnerability was discovered that could steal users’ passwords. A patch was released the next day, but not before 10,000 users were affected by the issue.

In 2008, IE8 was released with more CSS support, new RSS feed support, and new AJAX support. Also in IE8, the Developer Tools panel was added allowing developers to troubleshoot why their site looked like a dumpster fire on IE when it was looking fine on Firefox. In this same year, Google entered the market with its browser Chrome. Chrome didn’t have as strong of a following as Firefox, but it was growing in popularity month-after-month.

In 2012, Microsoft released Internet Explorer 10 as the default browser to Windows 8. IE10 solved a lot of the issues developers had with it by supporting more and more HTML5 and CSS3 code as well as (finally) integrated Flash support.

At this point, it was clear that Microsoft still wasn’t able to compete with other browsers. In reviews at the time, many reviewers noted that although IE10 was a significant improvement for code compatibility over IE9, it was still a far cry from relevant compared to Firefox or even Chrome.

Finally, in 2013, Microsoft abandoned IE’s original underlying layout engine (MSIE) and started using a new one called Trident. Trident wasn’t new to the game though. It had actually been used by (and replaced) by Firefox. When Firefox was still “codename Pheonix”, it was built using Trident. Netscape also ran on Trident.

Yeah, I’m super sure using a 10-year-old infrastructure that was both used and abandoned by your competitors was the play here, but that’s what they did and their market share continued to fall. By this point, they were sitting at under 10%.

And finally, the current version of Internet Explorer is called “Edge.” Microsoft officially released Edge in 2015 with the release of Windows 10. Gone was the “e” logo and much of the complaints people had about the previous versions of IE. Edge was rebuilt, from the ground up, using Chromium, the open-source software released by Google. This does mean that Edge supports nearly as much HTML5 and CSS3 as Chrome does, which is a huge deal. For the first time in 10 years, Microsoft has actually released a competent browser. Unfortunately for them, it’s about 10 years too late.

Today, Edge/IE holds a market share of about 2.9%, which is the first time (ever) that it is actually less than Safari (which sits at 3.3%).

But Why Does It Suck?

Websites have historically looked terrible on IE by default. Developers needed to add hacky lines of CSS and HTML to fix the incompatibilities. When I first learned about this, I had assumed that it was just because website developers were just being lazy. Boy was I wrong. It wasn’t just that you had to add extra lines of code to make a website look the same on Firefox, Chrome, and IE. It was that IE, literally didn’t recognize basic code in some cases and required you to do some truly outrageous things to trick it into working.

They Let Us Down

Honestly, Microsoft just stopped trying after IE6 and didn’t realize their mistake until just recently when they released Edge. Now though it’s just way too late. Microsoft could have, and should have, continued to push the envelope and add better features and support quickly as the years went on. But they seemingly just didn’t feel the need to.

Internet Explorer is a cautionary tale about how software that at one point dominated a market (90% remember!) can become completely irrelevant if complacency takes over. Microsoft did it with IE over the last 20 years and is doing it again with Microsoft Office and Outlook.

It Is Unnecessary Now

In a web ruled by Google Chrome (81% Market Share as of December 2019), another browser, especially one as sub-par as IE, just isn’t needed. It muddies the water and brings nothing to the table in terms of innovation. It has been playing catch up for over a decade due to their own incompetence and at this point, even if it was as good as Firefox or Chrome, it wouldn’t matter.

That said, competition is good for innovation. If Microsoft truly wants to be in this browser war again, they need to get back to innovating again. Edge was a huge step in the right direction, and if they are finally ready to play ball, then I’m excited to see where it will be in the next 10 years. If not, I welcome our Google overlords. 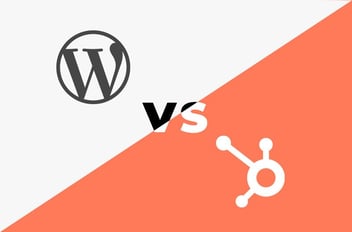 WordPress vs HubSpot CMS: From A Developer’s Perspective 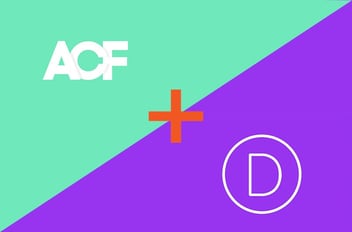 Divi + ACF: A Match Made In WordPress Developer Heaven